Resources for Printing and Distributing or Sharing

Art and design zines feature formats that many people do not feel capable of:  illustration, typography (often hand drawn), photography, printmaking, and graphic design. It's important to realize, though, that all zines are artistic in that they are created, usually by hand. Even black and white zines made on a photocopier and stapled together are made, and often that "low art" presentation is deliberate. Every zinester makes creative decisions: What format? What kind of paper? How to bind? It is difficult, to be sure, to make a distinction between zines and art zines. Even zines that are primarily "textual" are tactile and visual, with text placed on the page much as an image would be. [1] Truly, anyone with interest and motivation can make a zine. Collage is the great bridge between "zines" and "art zines" since anyone can cut out images and paste them.

For the most part, art zines are made by people who identify as artists or designers.  Many art zines explore patterns and classification. In Two Things I Love, Together (2009), the artists Alex Decarli and Adrienne Garbini place cats and cacti on every page. Other art zines result from appropriation, much like musical sampling: The illustrated zine Unlovable by Esther Pearl Watson is based on a teen's diary that Watson found in a bathroom. 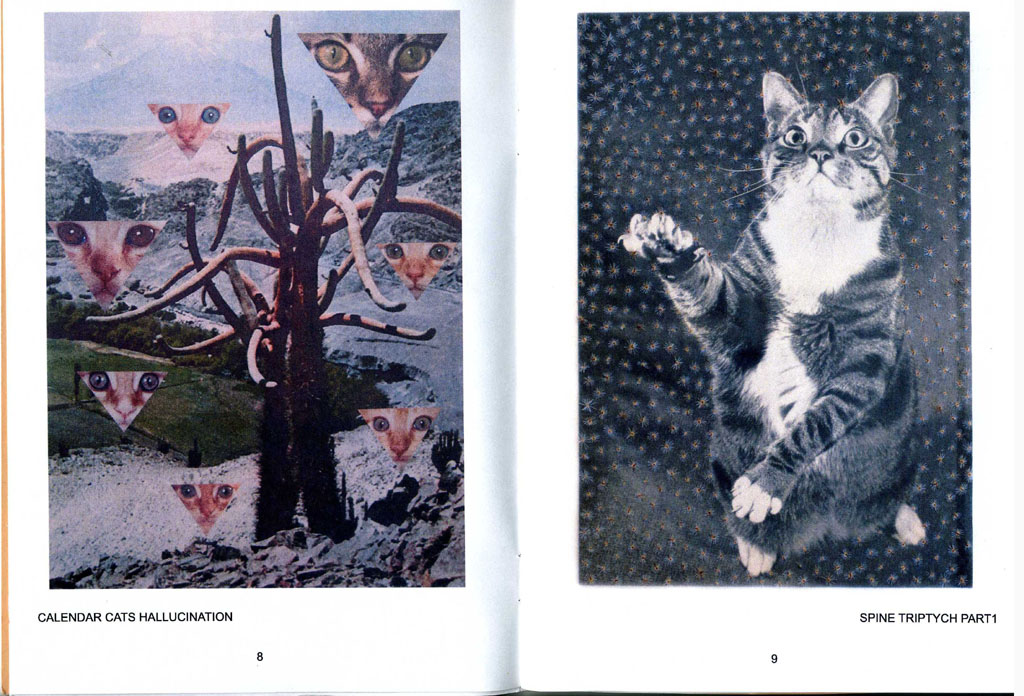 Two Things I Love, Together (2009), by the artists Alex Decarli and Adrienne Garbini (not in Pace collection)

The radical magazines of the early 20th Century--Dada and Surrealism in particular--have been described as avant-garde zines [2]. Historically, such publications have been more often referred to as Little Magazines. The experimental, radical design and content of magazines such as The Blind Man, Minotaure, Dada, Merz, and La Révolution Surréaliste were truly revolutionary in the art world, and their influence is ongoing.

It's impossible to overemphasize the radical use of the photocopy machine in the 20th Century. Check out this great article, "How Xerox Invented the Copier and Artists Pushed It To Its Limits" published on Atlas Obscura about it. 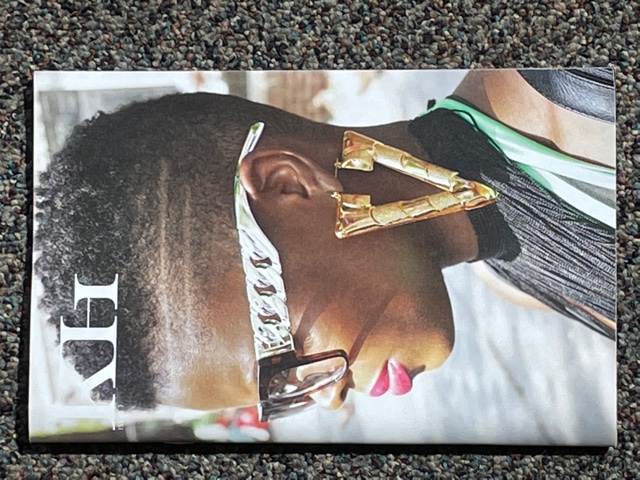 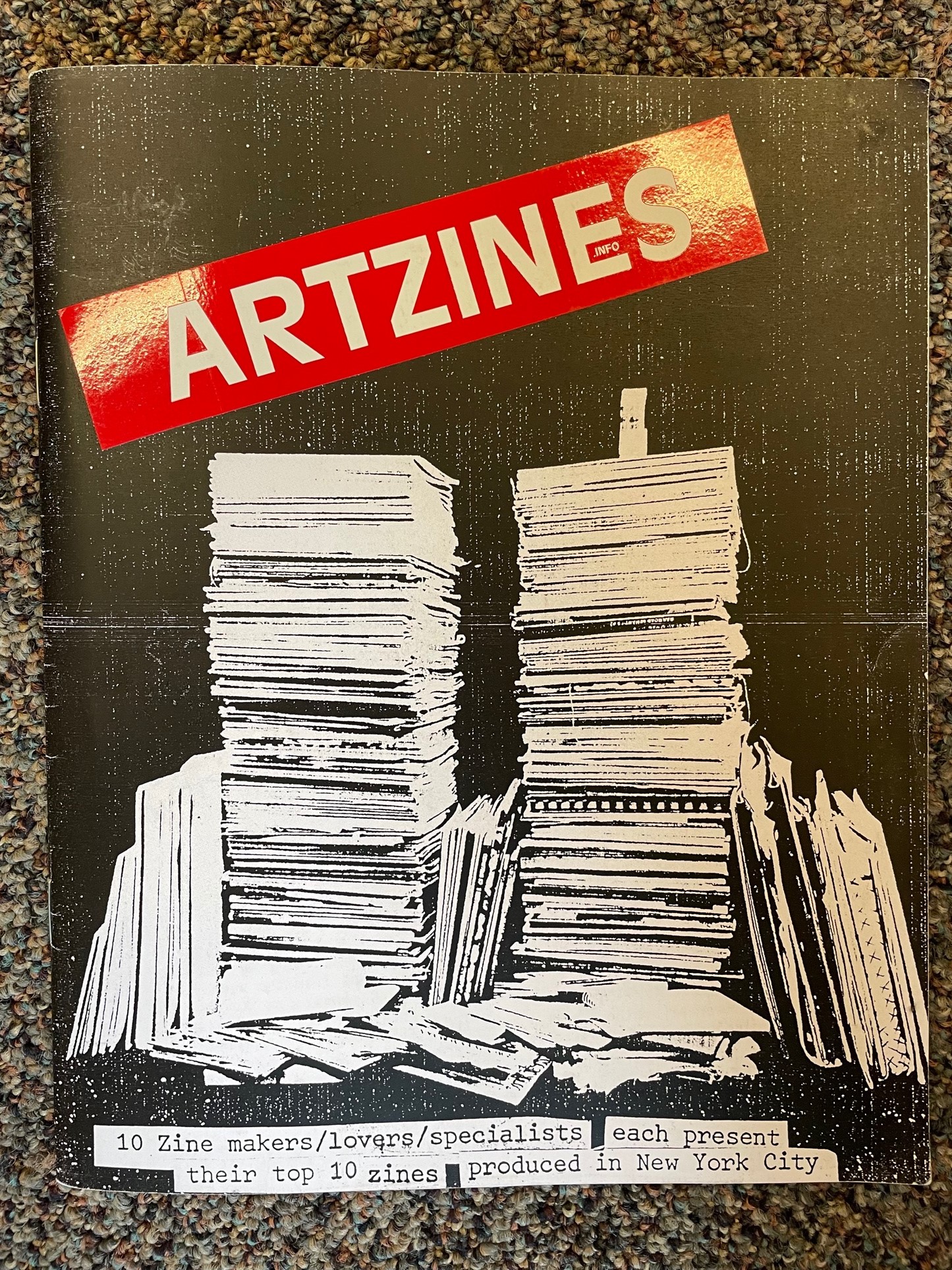 To make a distinction, artists' books are often unique objects or made in a very small edition. Artists' books as they are understood now exploded in the 1960s but originated in the European livres d’artistes of the early 20th Century. Instead of choosing to make a painting or a drawing, the artist uses the book form to present an idea. Here is an overview of artists' books from the Victoria & Albert Museum in London.

Artists' books are more costly than art zines, both to make and to buy, and tend to be called artists' books or book arts rather than zines by their creators. Art zines tend to have an ephemeral rather than a sculptural quality, whether that is in material or price. One focus of art zines is independent, unmediated production, outside of the art establishment. They tend to be made in larger numbers. Here's a visual example of a zine and an artist's book (not in Pace collection), both made by the same person, Laura Owens, an LA based artist: 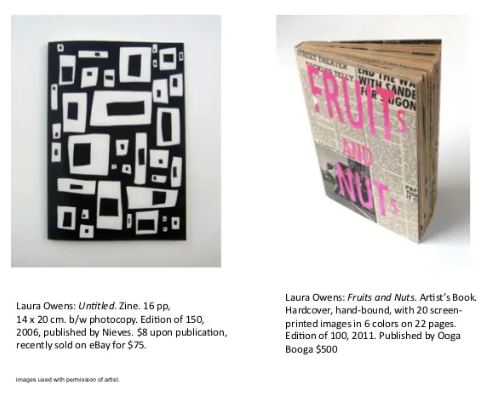 The rise of art and design zines, with features such as silk screen and letterpress printing, has led to an definition of some zines as moderately priced artist's multiples. Defined as an artwork produced in an edition of two or more, multiples challenge the definition of art as a unique creation. Zines, like posters, photographs, and art made through various printmaking techniques, are more "democratic" than unique works of art, more affordable to collect (and usually more affordable to make). 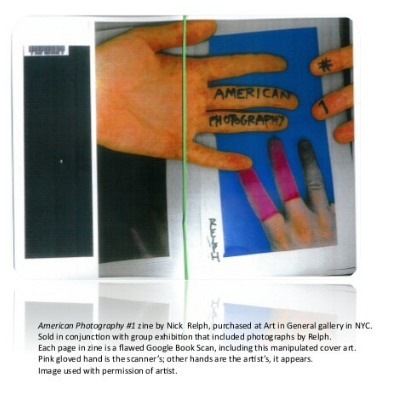 Many self-published booklets are lately described as"photobooks," but "Photobooks" the term has historically been used to describe professionally published books that feature photographs.

"Photobooks" now often refers to publications that could also be described as art zines, artists' books, or artists' magazines.

Search Connect New York (CNY), a group of libraries that shares resources and allows borrowing among libraries, for photobooks. You may request books from CNY, and they will be sent to your Pace campus library.

Stumble upon an appealing photography book on Amazon or somewhere else? If Pace and CNY do not own the book, you may  request it via our  Interlibrary Loan (ILL) resource. Not all requests will be fulfilled, but you may try! (Rare, oversize, costly books and ephemeral, scarce zines may not be available via ILL.)

Zine depicted is not in the Pace collection.

Lookbooks and Other Fashion Publications 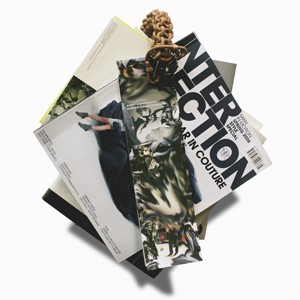 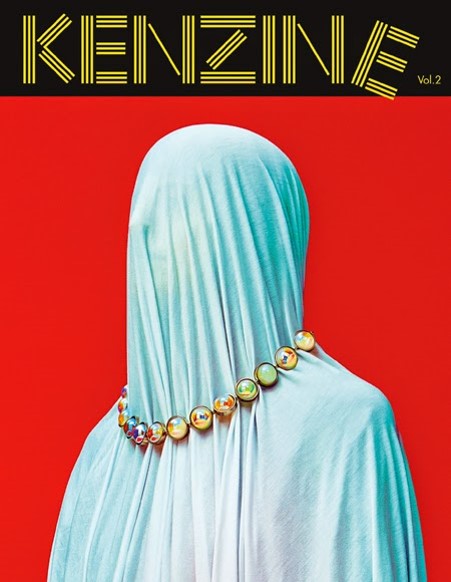 (on left) Alternative Lookbooks: Bless published their lookbooks inside independent magazines, as collaborations, over several years, starting with N°23 in 2004: At the end, BLESS published a limited edition object containing twelve selected Bless lookbook-magazines ('SUP MAGAZINE, Capricious Magazine, mono.kultur, Paris-La, Purple Magazine, Textfield, etc.) held together by a Blessn° 43 Handle (on right) cover of KENZINE, a limited edition publication by fashion brand Kenzo. These are not in the Pace collection.

"Print Objects and Fashion Subjects: Independent Publishing in the Contemporary Fashion Milieu Since the 1980s."

Abstract—The author documents and discusses the independent books, magazines, and print projects produced by fashion designers since the 1980s when fashion and art aligned and fash- ion publishing transformed. Significant collaboration among fashion designers, graphic design- ers, photographers, and artists developed in the 1980s and continues in the twenty-first century. Self-published zines and lookbooks, small-press photobooks, and independent magazines point away from the fashion industry and towards the febrile and conceptual world of artists’books and magazines. Fashion designers’practices have expanded, and book making and publishing, rooted in art and graphic design, have become significant and symbolic multidisciplinary activ- ities within specific networks of distribution.

Booklets as Book Dummies or Rough Drafts of Publications

John Jamesons: a short history of a famous house

Dummy copy with preliminary drawings for: Origin of John Jameson whiskey : containing some interesting observations thereon together with the causes of its present scarcity / with drawings by Harry Clarke. Dublin : Printed for John Jameson Distillery Dublin and 7 Mark Lane London by Maunsel & Roberts, 1924. Cover title: The History of a Great House.
Physical description: 1 booklet (24 pages) : pencil and watercolour ; 19.7 x 13 cm..

the above description is from the National Library of Ireland catalog. Notice in high res scanned images that booklet was bound with string.